As Christmas draws closer, our esteemed journalists are working overtime to provide the public with low-quality content they neither asked for nor deserve. Here’s this week’s roundup:

In keeping with the season of giving, the University has provided an update on the century-spanning construction of the new management building. Compared by some to the Sagrada Familia church, which started construction in 1882 – a similar time to when ground was broken for the Bath site – the fallowed earth and scaffolding has offered a striking vista to campus visitors for decades. The Management Department expressed disappointment at having to delay their takeover of every single building on campus. “We were hoping to infiltrate the STV by January next year, but unfortunately this won’t be possible”. The University refused to comment on rumours that second-year architecture students were responsible for the plans as part of their coursework. Indeed, Norwood House is rumoured to have been designed by a student who only realised that they had a deadline the night before – explaining its gulag overtones.

Bath Time tried to speak to prospective students who would one day be able to enjoy the building, but unfortunately they are yet to be conceived.

A devastated Wellington College alumnus has held a memorial service for his sixth form leavers hoodie, after a tragic Circuit Laundry accident caused his prize possession to shrink beyond repair. “Words cannot do justice to my loss”, he mourned. “It feels as though a part of me has died today. Without my Fruit of the Loom fabric signalling how much better I am than everyone else, I’m lost. How will everyone at Bath know that I peaked at 12 and have been holding onto the past ever since?”.

To commemorate the fallen, he proceeded, in reverent fashion, to read out the names of every member of his boarding house engraved on the shrunken garment. “It’s what the Head of Sixth would have wanted”, he wept.

To substitute for the gaping hole in his personality, intellect, and wardrobe, Montgomery Twiddledick embarked upon an epic Ralph Lauren spending spree, espousing vague notions of some social validation.

There was consternation among University of Bath Olympians as one rogue student claimed joint credit for their world-beating achievements. Conversation was flowing at a Buckinghamshire family’s Christmas dinner, as undergraduate Jack Harrison earnestly impressed upon his disinterested grandparents that “Teamwork makes the dream work”. Taking partial responsibility for Tom Dean’s two gold medals, despite not once setting foot in the STV, Harrison believes that sharing a lecture hall with the Olympian qualifies him as Dean’s mentor and confidant. The student, whose only experience of Tokyo is through the anime that he watches, also claims to have inspired the pentathlete team – on the basis that he once knocked over their fencing gear outside the SU.

Bath Time approached one anonymous Olympian for comment, who stated, “I’ve never heard of this person in my life, but it’s always nice to hear the support from fans – even if they are a bit weird”.

Much-adored local transportation providers First Bus took a break from causing continual traffic jams in city centres today to announce it is becoming the first carbon-neutral bus service. After succumbing to the demands of the climate-and-weed-loving houseboat community, First Bus spokesman Simon Lowe stated how an eye-opening internal review had found that the most polluting aspect of the service was the vehicles. All buses have since been removed with immediate effect.

To further reduce emissions, the board also advised passengers to stop breathing, but quickly realised that this was only a short-term solution. The much loved, and lesser-spotted, U1 and U2 services will now be replaced by the W1 and W2 walking routes, with the choice of summiting Bathwick or Widcombe Hill. These will be led by local sherpas, well-acquainted to high altitudes, and who, for posterity, will go missing when you need them most. Bath Time approached passengers on the W2’s maiden voyage, but they were too breathless to say anything meaningful.

Despite advocating for the dangers of gaslighting and emotional manipulation in her recent essay, psychology undergraduate Alice White has consciously chosen to start dating a terrifically dire bloke in optimistic efforts to fix him. She cites his blunt lack of emotional intelligence as attractive and mysterious, and speaking to Bath Time, she bubbles elatedly: “Studying psychology has really given me an insight into the human brain and its behaviour. My Tinder bio told guys I could read their minds, and when this one came along, I immediately sensed sociopathic tendencies from his history of dissecting small rodents and taking American Psycho literally. Despite knowing more about mental disorders than most others, my taste in men comes largely from serial killer documentaries. God, I’m such a Gemini!”.

We asked her wanky new boyfriend for a comment; but he fixed his hollow stare on us and informed Bath Time that we were imagining things, before letting out a sigh of pleasure as he stabbed a puppy with a fork. 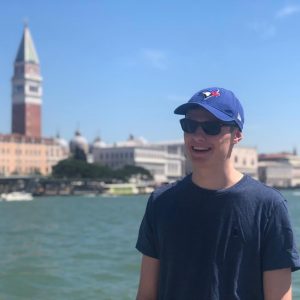