Pursuing a challenging STEM degree at university would, one might reasonably assume, not leave a great deal of spare time for hobbies – let alone starting your own successful small business. However, that is exactly what one 21-year-old (now final year) BSc Biomedical Sciences student at the University of Bath has managed to do; and all in the midst of a global pandemic, no less! Her name is Hannah “Edgie” Egerton, and she’s the brains and brawn behind ‘Edgie Eats’.

The growth from hobby to small business was a relatively quick one but cooking and baking have been pastimes that Edgie has enjoyed since she was young.

“My grandma taught me how to bake cakes and pastries”, she reminisced. “When I came to uni [in 2019], I mainly began baking post-match treats for my hockey team” – feats which earned the avid hockey player another endearing nickname: ‘Fresher Baker’. It was from there that word quickly spread of her skills in all things baking and she began to bake more in her spare time, for herself and friends.

Then the first COVID lockdown hit. Just prior to this, in February 2020, Edgie had launched a ‘foodie’ Instagram page for general recipes and food posts. As was the case for many of us, with a lot of newfound time on her hands, she began to really throw herself into baking and cooking (all while still managing her degree, of course!). During her second year of uni, as her baking prowess became well-known throughout the university’s hockey club and beyond, friends (and friends of friends) began to pay for ingredients and commissions for bigger events like birthday cakes.

At the beginning of 2021, with rave reviews from those who had been privy to her treats already, Mary Berry 2.0 decided to ‘go for it’ – and Edgie Eats began to evolve from hobby to business, selling everything from small treats and traybakes (for which she’s always coming up with, and open to, new ideas) and box deals to special requests for events (which have even now extended to wedding cakes!). Reaching out to popular local food and lifestyle pages on social media such as @batheats and @shoplocalbath, the newly minted business woman soon became established in the local baking scene, forming connections and gaining collaborations. She also managed to set up her own website to help deal with ever-increasing order demand.

The move to go commercial was a hit from the get-go; orders started flying in the beginning with local deliveries but soon expanded to postal service across the country, with cakes from Glasgow to Surrey. For Mother’s Day, she received and sent out 27 orders and boxes in the span of a week, whilst Easter week brought with it 24 orders.

Positive reviews were also flying in from the community and other small businesses alike. Amie MacNab-Jack (founder of ‘Sips’ coffee company) commissioned Edgie Eats for a birthday cake. She gave high recommendations, raving of the “true home baker” delivering “sheer comfort and timeless taste” in her products, and meeting her every expectation in terms of both deliciousness and the custom aesthetic of the cake that was envisioned. Local Laura Taylor – who came to Edgie Eats to supply treats for her wedding – also couldn’t fault the young baker, saying:

“We got in touch with a few small businesses (including Edgie Eats)… and the lovely Edgie even supplied a taster box to help us decide! We cannot fault how wonderful she has been – her bakes are delicious, and she as a person is lovely!”

Buoyed from these positive responses, the next step was to move off the internet and take the product to the people! The first Edgie Eats market, on the university campus in June (which sold out in the first 2 hours of the 5 hour slot!), was followed up in Trowbridge and (more regularly) at Green Park station – the latter of which gained her attention from Muw Shed Café whose owner recognised talent and approached Edgie about becoming their local cake supplier.

“I was really surprised how well it went, to be honest. I’ve never done anything to do with business, so this was a big learning curve – and things have changed so much in less than a year already”, she said. “It’s nice to see your own hobby evolve into a business, and making money”, she added; but was always careful to make sure she kept her passion for baking that had gotten her started in the first place, while balancing other commitments like university and sport.

More recently, the baker, businesswoman, hockey player, student and newly-certified St John’s Ambulance Emergency Crew member has been taking a break from running her own business, focusing on a stressful final year and hockey season. With current plans to resume full services following the end of the hockey season around March 2022, Edgie spoke of the future saying:

“I’m super excited to see where Edgie Eats goes. I’m going to train to be a paramedic after my Biomed degree, and work for a few years in the ambulance service whilst baking some cakes on the side. The end goal is to own my own café and really put Edgie Eats on the map… that would be the dream!”

However, for all you baked goods fans out there – do not fear! Brownies, blondies, cakes and more will soon be back for her eager customers, new and old. With a fresher’s week stall that sold out in just 3 hours and a Christmas stall at the SU’s Christmas market – December 9th, 11am-2pm (save the date!) – the future is bright for one of Bath’s promising local small businesses run by, well… one of us! 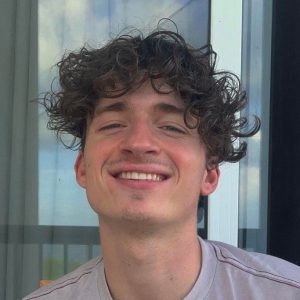