It was great to have the opportunity to speak to both Chris and Elizabeth about their bids to be the next Sports officer, delving deeper into what inspired them to run and what their top priorities are if elected. Both have accumulated a respective wealth of experience within SU Sport prior to this race – Chris as Chair, Captain and Social Secretary at the Handball club and Elizabeth as founder, Chair and Secretary of Weightlifting. Elizabeth has also been a member of the Sports Exec as performance officer. These experiences are what the candidates believe make them the right person for the role, but how do their platforms compare?

Chris and Elizabeth have provided us with extensive manifestos, packed with proposals they would implement if successfully elected. Elizabeth wants to ensure that SU Sport is able to effectively engage with students once restrictions are lifted and present itself as safe and welcoming. Chris also prioritises the post-COVID future of SU Sport, making sure first years who have missed sporting opportunities this year are not disadvantaged by having “missed out”. His other priority is to increase the sustainability of the STV and sport at Bath in general.

This is likely to be the key issue in the Sports Officer race. Pressed further about his proposals to create more sustainable practices around SU Sport, Chris has rooted them in reducing the carbon footprint of clubs. In aligning the away fixtures of teams as far as possible, Chris hopes to address these concerns by reducing transportation usage. Elizabeth also supported the coordination of resources between clubs. She believed that clubs acting within a community would benefit them in the long run because it would be more environmentally efficient.

Beyond this, Chris wants to reduce paper usage by clubs as much as possible, and further increase reliance on technology to develop more sustainable practices. Elizabeth’s additional proposal was for clubs and the SU to organise second-hand kit and equipment sales to reduce the amount of new kit purchased every year.

Both candidates offered their support of the multi-sport membership and wished to carry forward some elements of it into next year. Elizabeth said she wanted to make it more financially viable for clubs by distinguishing recreational players from those wishing to compete at BUCS level. Chris wanted to create a ‘hybrid’ cost structure, incorporating elements of the multi-sport membership and the previous individual fee. Both proposals seemed quite under-developed, so will need to be more polished once the winner takes on the role.

Support was offered from both candidates for a ‘sports showcase’ event during freshers week next year, where all students could try out an array of sports available on the same day to find their favourites. A similar event has been hosted at nearly all recent Freshers’ weeks.

Chris and Elizabeth are keen to create a more inclusive and accessible environment at the STV gym; proposing hours where only women/non-binary members are able to book. Elizabeth was keen to emphasise that the bookable slots were working. To make the cost less prohibitive, she also discussed the idea of a gym or ‘classes only’ membership, to ensure that students only wanting to use one of those services aren’t charged for both. Chris said he would endeavour to look further into high gym membership fees if elected, however, he currently has less experience as he has never been a member.

This is sure to be a close and exciting race, as both candidates are offering well-rounded manifestos and running on crowd-pleasing platforms which will almost certainly be popular. Best of luck to both! 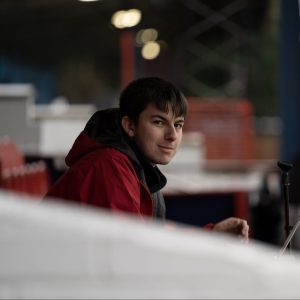 From Annie’s app to limitless safety nets: our take on how this year’s president candidates stack up.

From Annie’s app to limitless safety nets: our take on how this year’s president candidates stack up.