On a rainy day in April, 22 coaches and an SU minivan made their way to Cardiff to see how University of Bath’s sports prowess to that of Cardiff Metropolitan.

Kicking off the day with an exciting game of wheelchair basketball, the Bath team started strong against the Archers. Unfortunately, Cardiff Met managed to get through Bath’s defence, most likely down to the game being on home ground and familiar territory. Despite limited support from the stands, the game continued to show pace and the final score saw a win for Cardiff Met with 60-26. Fair play to the Archers, but an excellent show of effort from our Blue and Gold team.

The Bath rugby league boys put in a great shift against Cardiff Met, seemingly unfazed by the Met injury that required a stretcher and triggered stoppage time not long after kick-off. Completing the game with a dominant performance, the final score reached 32-15 to Bath. With heavy tackles and tough hits, the several tries scored were followed with accurate conversions. Despite the array of Hawaiian shirts in the crowd and the women’s football starting on the next pitch during the second half, the league boys did Bath proud and took the win.

Most definitely not overshadowed by the final fixture of the day, men’s rugby union, the women’s netball against Cardiff Met brought in a great crowd and did not disappoint. With the stands divided between fans from each uni, the score climbed rapidly right from the start, with Bath securing a 6 point lead after the first quarter. Reaching 26-24 to Bath at half-time, it was a close game throughout. The Blue and Gold girls put up great attack and defence with some strong interceptions. Despite numerous referee calls for contact, the last 5 minutes saw only one point between the teams and continued to stay level right up to the last second. Securing a draw with the final score at 48-48, the girls fought hard right to the end.

With the women struggling to come up against Cardiff Met in rugby union, they posed no real threat and lacked cohesion. Despite a determined team spirit, the team was slow and ultimately out-classed against Met’s great ball carriers. The final score of 60-0 to Met was not Bath’s finest moment of the day, but the Bath ladies put in a massive shift away from home ground. The men’s match was saved as the last event of the day, the best till last perhaps… Crowds gathered around the pitch in the cold to watch the spectacle which promised to be a good game. In a BUCS Super Rugby-esque 80 minutes, Bath were leading at half-time but Met soon came back to equalise at 33-33 within the last few minutes. As the Welsh attack came up to their 5, Bath managed to fend off another Cardiff try, only for a drop-goal to win Met the match, well after the clock had gone into overtime. Fortunately, during the game the news had been received that Bath had won badminton, and so Bath had won Varsity 2019 overall – bittersweet for the rugby boys…

The women’s hockey match provided great entertainment with some amazing skills on show right from minute 1. Despite a slow first half and the heavens opening just after half time (which the fans weren’t best pleased with) Bath really came into their own during the second half. An own goal from Cardiff, alongside Met injuries, showed the dents in Welsh defence, headed by their impressive goalie. With a final score of 2-1 to Bath, the Blue and Gold women did us proud and came away with a deserved victory. We spoke to captain Anna Reynolds and coach Jody Paul after the match, who were very pleased with the result. Proud of the team’s performance, they reaffirmed that this result adds to a good season for the team.

The women’s game was spurred on by the men’s win and the Jets’ performance, however, it was going to be a tough game from the start. Despite great pace and commitment from Bath, it was 48-30 to Cardiff at half-time and that score difference kept growing throughout. Bath attempted scoring regularly and kept stamina high, but at the end of the match, the Archers won 91-45. The men’s game, on the other hand, started strong, with Bath taking a 3 point lead in the first few minutes. With the arena packed and loud, Bath’s offensive was persistent and determined. Although the Archers caught up, they didn’t equalise in pointage, reflected in the final score. Sadly, it was the outgoing Sports Officer’s last game at Bath, but what a high to end on: 84-78 to Bath.

Another famous Varsity event was the the beautiful game. The women’s football was an exciting one, quickly getting to 1-all and staying at that score for a while. Historically, the rivalry between Bath and Cardiff Met was a close one, with Bath beating them last year but defeat also not being a stranger to our Bath team. In terms of Bath’s playing style, the first half was dominated by Bath players taking frequent shots that ended up being weak and finishing goalie’s hands. However, this didn’t compromise on the overall game, with Bath winning 4-2. The men’s match was a similar situation to a lesser degree; the first goal of the game was an own goal from the Met side. Unfortunately, this style didn’t persist for Met, with Bath losing 2-1 to Cardiff.

Water polo was a match that got unprecedented support (outside of the usual suspects), but this could’ve been because Welsh weather, had, at that point, reached its peak. Anyway, once all were crowded in the small viewing area and sufficiently warmed-up, Bath got consistently rowdier with every goal we scored against Cardiff, of which there were many. The whole team did well, but props to the Bath goalie for being an incredible defensive barrier. Final score: 11-5 to Bath.

Tennis was one of the first events of the day but even the early start didn’t stop the supporters, Bath and Cardiff alike, from bringing themselves and their pints to the cosy viewing area. The excitement began during the warm-up, where players’ friends jokingly commented on their friends’ play, which was a good indicator of the confidence each side showed. After two tense games, Cardiff came out on top, with a final score of: 7-6 to Met.

From our Sports Officer:

It was yet another fantastic Varsity over at Cardiff this year, with a record number of fans attending from Bath. It was amazing to see the passion from our students both on the field, and supporting each other from the sidelines. Despite it being a pretty evenly matched day, it was great to come away with our 4th title to remain undefeated and I look forward to seeing the event go from strength to strength in the coming years – hopefully with better weather! Thanks to everyone involved, from the athletes and supporters to the staff who gave up their whole day and more to ensure our students had a safe and enjoyable experience!

From our Sports Officer, Andy Galloway. 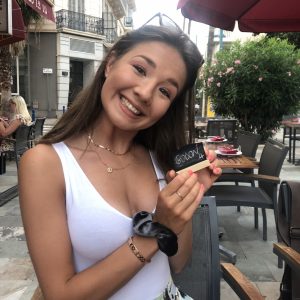 Emily is our Lifestyle Editor and a final year Politics and International Relations student. She was formerly Features Editor (2019/20). If you want to talk all things music, food and movies, get in touch with her!