Straddling the border between prose and poetry, The White Book (2018) is a heart-breaking examination of loss through the lens of everything white. 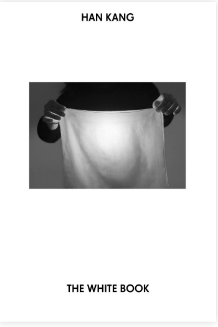 The phenomenal success of her 2015 novel The Vegetarian hasn’t stopped Han Kang from experimenting. From the first page of her newest release it’s clear that the author wanted to try something different, and the effect is mesmerising. The book begins with a list of white things – snow, rice-cakes, the moon- and it takes the reader on an unpredictable journey from there. A meditation on the beauty of falling snow quickly becomes an honest look at loss. From crisp white sheets to the piercing light of stars, the novel flows naturally from each piece to the next. On the third poem, we first learn what the book is really about – Han Kang’s older sister, who lived for only two hours. The book then progresses to inspect every facet of that loss – how do you deal with losing somebody you’ll never meet? How do you accept that her death allowed you to be born?

Though there is a consistent narrative, the book is structured as a series of titled free-form poems. This takes the emphasis away from storytelling and gives Kang a platform to delve into the emotions of her characters, unravelling their nuance and complexity in the process.
The book also contains a series of ambiguous black and white photographs that drew me in ever further. It’s hard to tell what’s going on – in keeping with the writing. Nothing is explicit. On the surface, The White Book is novel about loss, but it’s so much more than that. It captures the strangeness of the human condition, the uncertainty with which we all live. As it travels from place to place, skipping ahead and drawing back through time, it maintains enough consistency to call itself a novel, but it never feels restrained by its underlying plot.

It’s impossible to review this novel without giving due credit to the translator, Deborah Smith. Though originally written in Korean, you’d never know. And I suppose that’s the job of a good translator. Her use of language is deft and precise, and I couldn’t find a word out of place. Everything just fits together.

I think a lot of people would shy away from reading a poetry book, and I understand why. Poetry can be inaccessible and pretentious. Having said that, The White Book is neither of those things. It is grounded, relatable, and all the more accessible for its format. If you’ve never liked poetry, don’t count this book out.
The White Book is the most original and moving novel I’ve read this year. It’s right at the interface of prose and poetry, never feeling like too much of either.

Robert Brett is a final year Physics student. He is the chair of the Literature Society for 2018/2019.

The joys of cycling to campus