Questions to Candidates: Our Verdict

Three question panels were held for candidates this Monday and Tuesday at the Tub; both are available for viewing on the SU Facebook page. Bath Time highlights the main points that were made and our personal thoughts on the events. 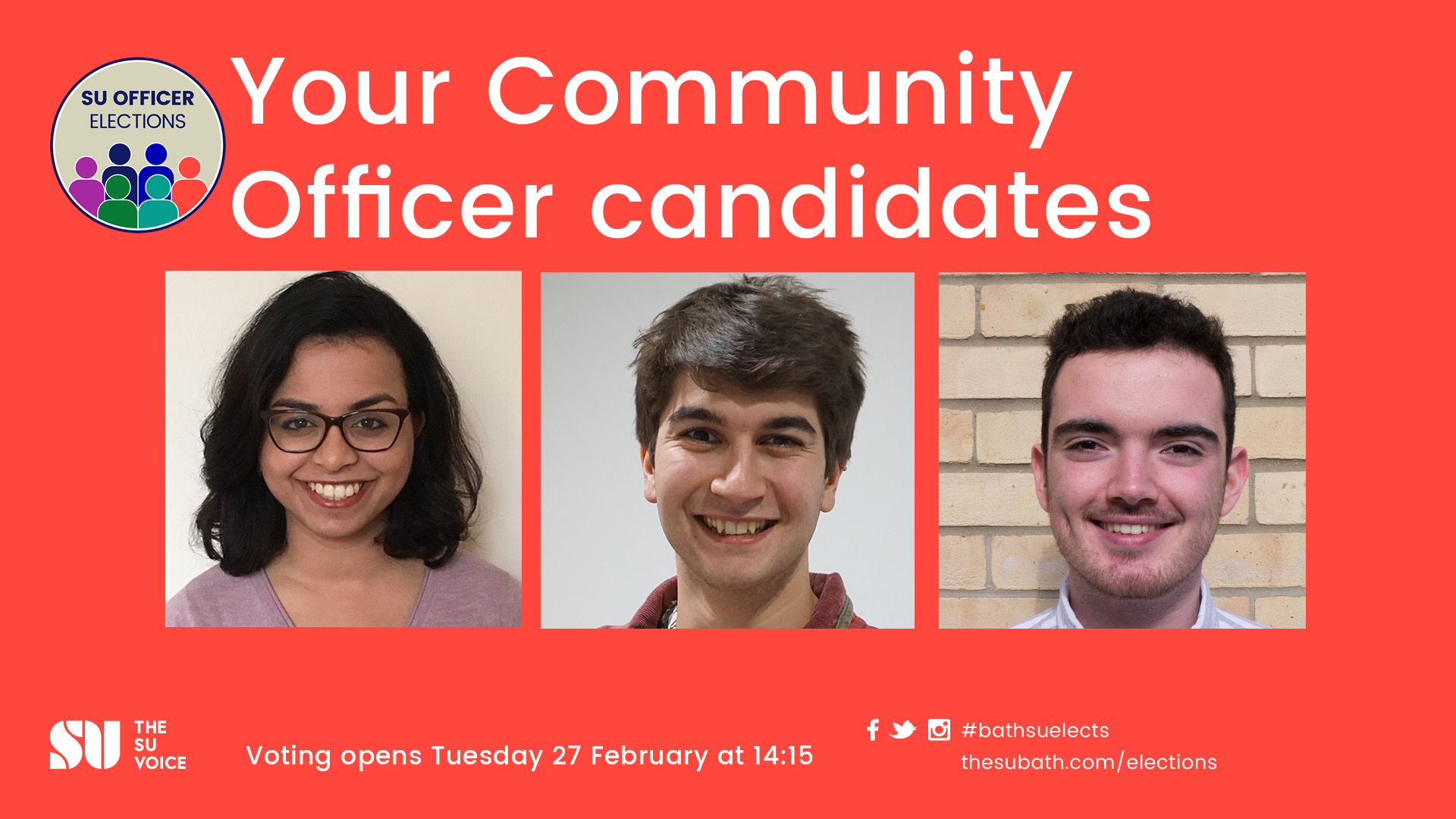 Francesco appeared bubbly, a little nervous, as he defended his ideas; such as prioritizing mental health and increasing the number of councillors, as well as requiring mental health training for tutors. He interestingly proposed setting up a billboard in town to promote events happening on campus, in an effort to connect the university to the town and better the student body’s reputation. He defended his limited experience in the SU by stressing his determination and confidence.

Alisha kicked off with her idea of home-sharing with the elderly, as a solution to the shortage and high prices of accommodation. However, Francesco said he would try to lobby against the council’s decision to prevent the construction of further central student accommodation. On this topic, Zeid also disagreed with the council and criticized purpose-built blocks in the centre which were not affordable. Alisha explained her significant experience for the student body, introducing ideas such as rewarding external volunteering in town through an award; aiming to bolster any positive reputation of students in the community. She made a point about cultural stigmas within mental health issues, where Zeid’s experiences as an NUS delegate brought near-moments of debate between the two candidates.

Zeid worked his way soothingly through the questions: notable points he made included increasing the budget of the gender equality group, having part-time offices to increase points of contacts for students in the SU and strengthening the hate crime reporting system. Admittedly, on the latter point he stumbled somewhat when his individual question referenced the existing hate crime mechanism. Throughout it all, he emphasised his impressive resume with the SU and the NUS. 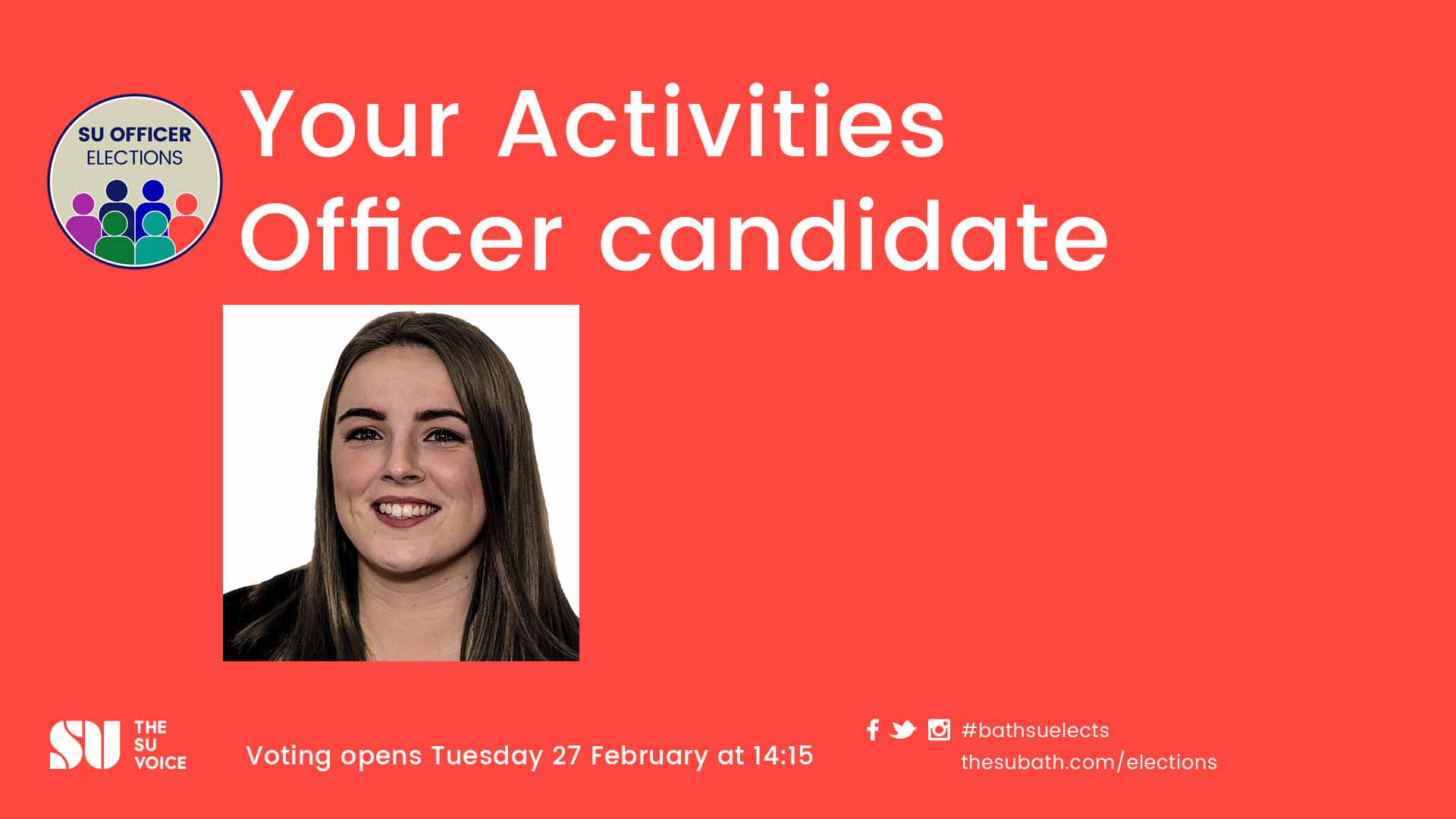 This was by far the most heated debate, with Kim Pickett running for re-election against herself. She stressed how she secured substantial funds for activities last year and how she was confident in continuing her role. She stated she was against art societies getting priority over other groups, as well as criticising the fact there were only three members of staff assigned to help societies. She also suggested a ban on non-reusable plastic cups on campus. Overall, she seemed remarkably confident she was going to win. 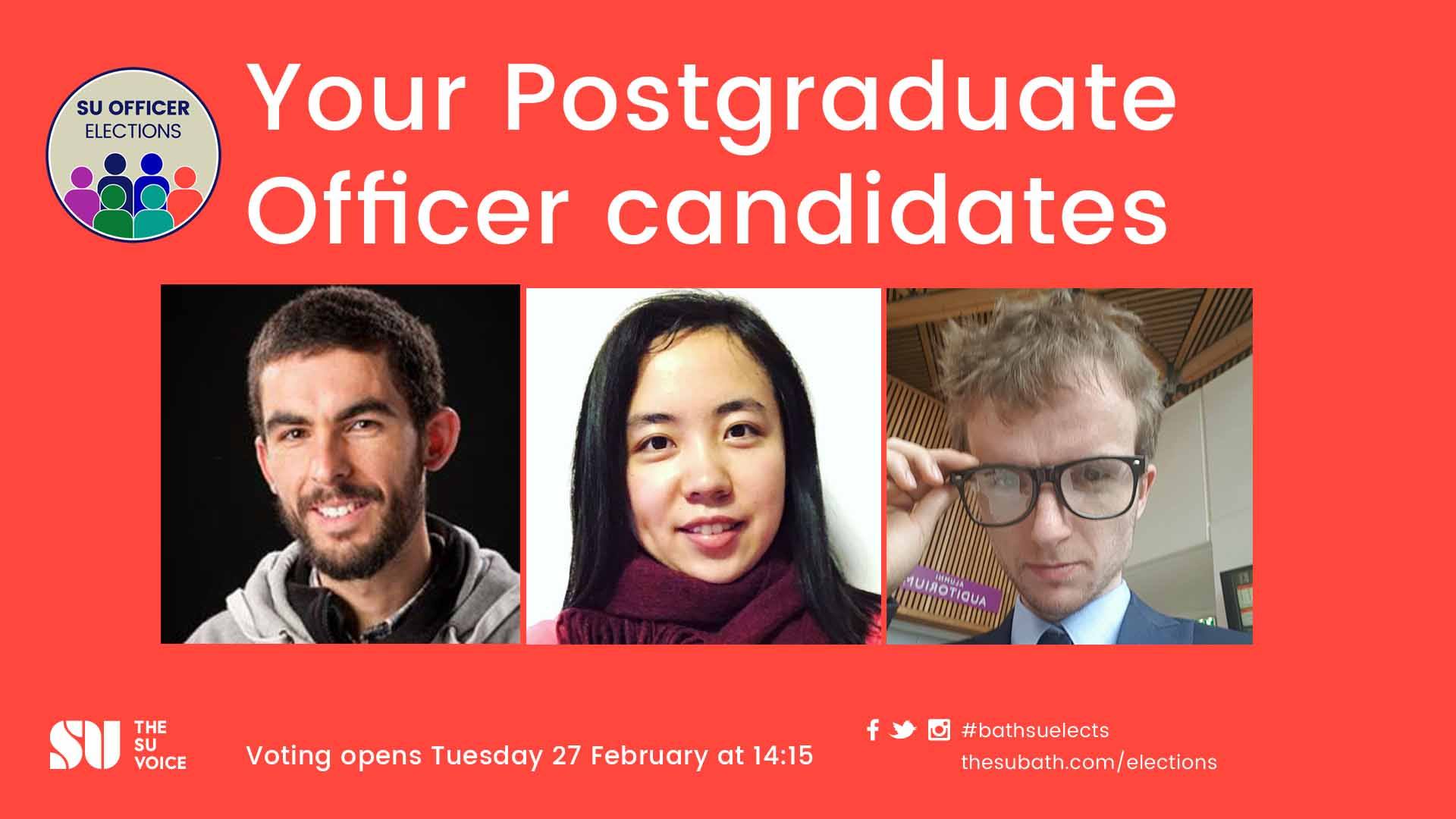 Francisco explained his own experience as a PhD student, blaming a lack of research space and overcrowded offices. He understood that master’s students would have other priorities, like finding more study space: this is what Scott insisted on, focusing not on the library but on department buildings as potential places to study, an idea which was criticised by Francisco as unrealistic. Jiani, on the other hand, defended her idea of putting money on library cards to pay for food; a system which she says is successful at other universities. She also suggested a peer-mentoring program led by PhD students for top master’s students.

All candidates stressed their international background and did not differ on solutions to promote cultural diversity. 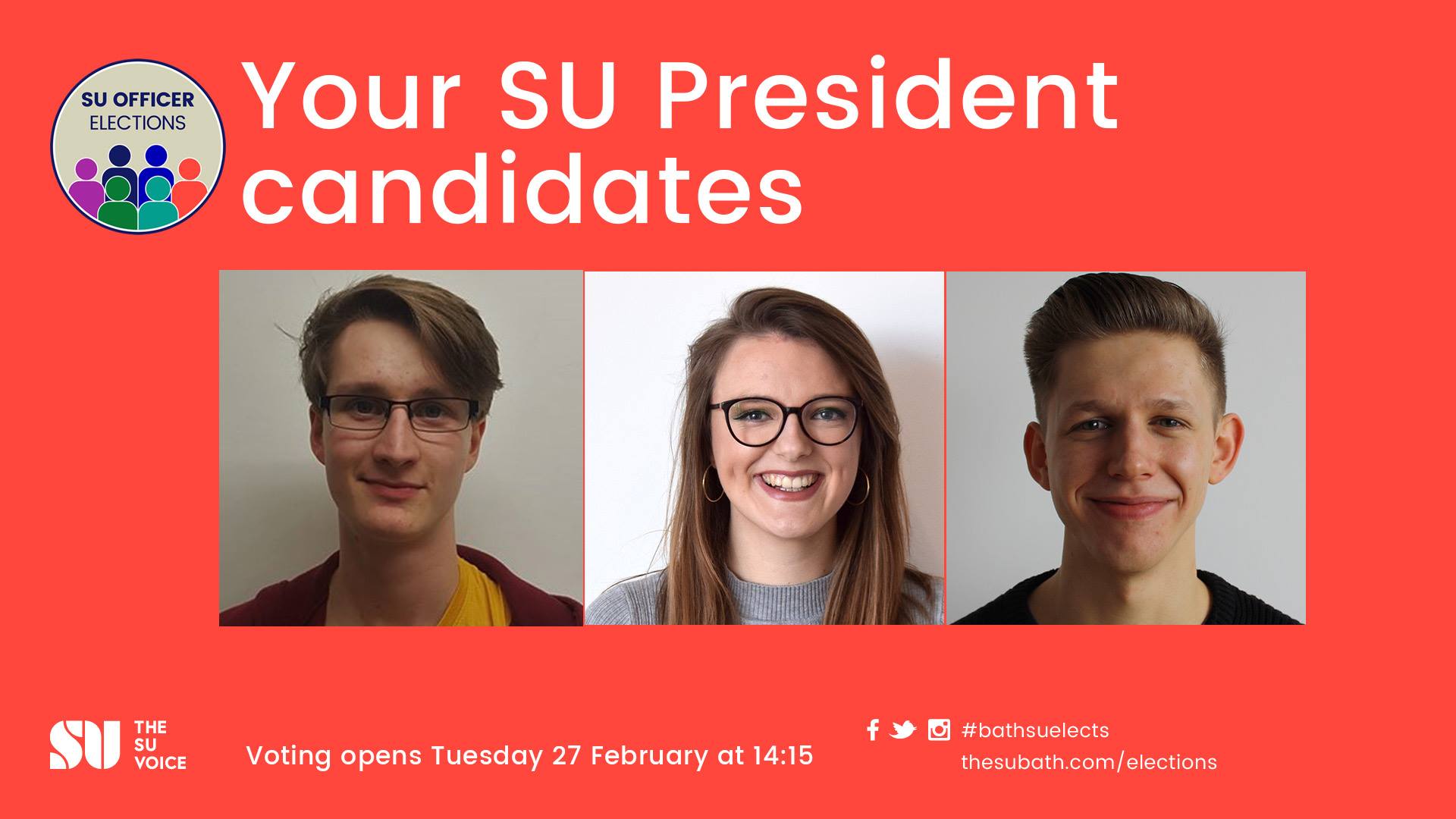 On the subject of study space, Eve suggested an extension of the library when the new VC stepped in, whist Lester wanted to optimize space already available. Cameron made the point of developing all social areas, as not all students work in the library.

On the bus services, Eve had very defined ideas and had contacted First already, with suggestions to extend the U2 service from 10pm to midnight and to create a shorter loop bus route which would pick up students down Bathwick hill and back to campus. Cameron positioned himself as a realist, by saying the SU should provide detailed information about use of the service to First so that they could, as a company, better meet demand. Lester suggested to set up a live departure board, to help better usage of the stops on campus to avoid queues.

On individual questions, Lester wanted to build a relationship with the new VC around communication with the student body, Cameron said he would use funds to further efforts around mental health and Eve proposed an interactive map of study areas on campus.

When concluding, both Eve and Lester advanced their notable experience within the SU as proof of their involvement, whilst Cameron counter-attacked by criticising those already too involved as unrepresentative of the student body; he argued he could reach out better to the many students who ignored the SU. 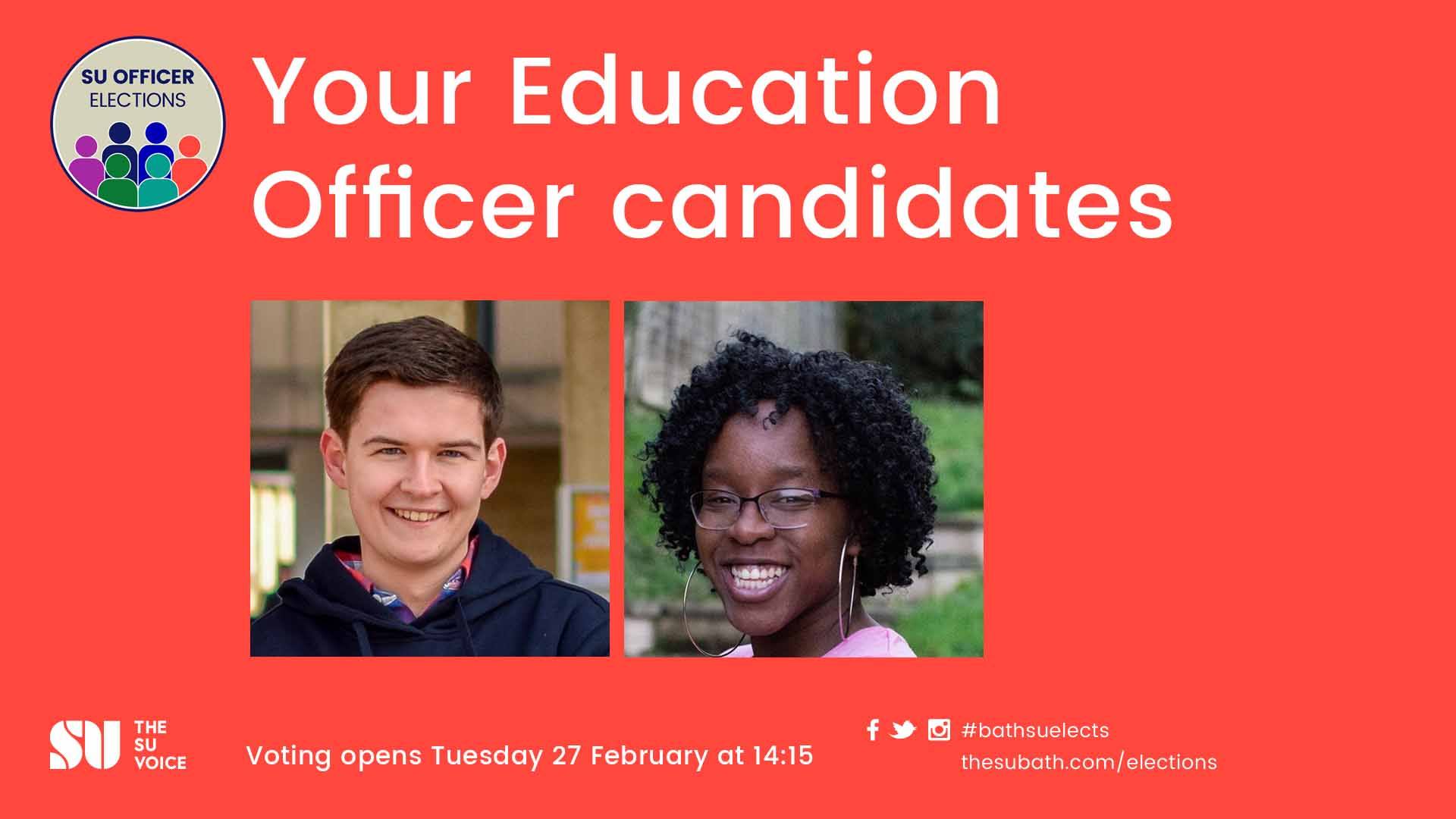 The final round of questions began with candidates Tamara Reid and Jack Kitchen discussing all things education. In general, this was the most agreeable of all the debates, with the candidates seeing more eye to eye at times than Kim did with herself.

The questions opened with the issue of keeping students engaged with the ongoing curriculum change. Tamara suggested a more frequent town hall style forum which would be opened up to students, as well as a video about the transformational changes. Jack concurred, and added that he would work with the Centre for Learning and Teaching to promote focus groups.

Another big issue was the topic of the academic rep system. Both concurred that the training offered at the reps conference was not enough, as student chairs often could not attend. Jack further suggested that he would overhaul the faculty rep system as there is a lack of engagement with academic reps, instead bringing back faculty forums. Instead, Tamara suggested that she would target the often-forgotten departmental reps and create a specific training guide that would be more streamlined than the current SU options.

For individual questions, Tamara was targeted on her manifesto point to create a study space in Oldfield; given existing tensions between the city and the university. She argued that this would actually help improve the relationship, as certain areas could be open to the community. Jack was quizzed as to whether or not his proposed secondary unit evaluations would merely be the grievances of students who had not studied enough. However, he stood by his point and argued that current unit evaluations were simply too early and that assessment feedback was still integral. 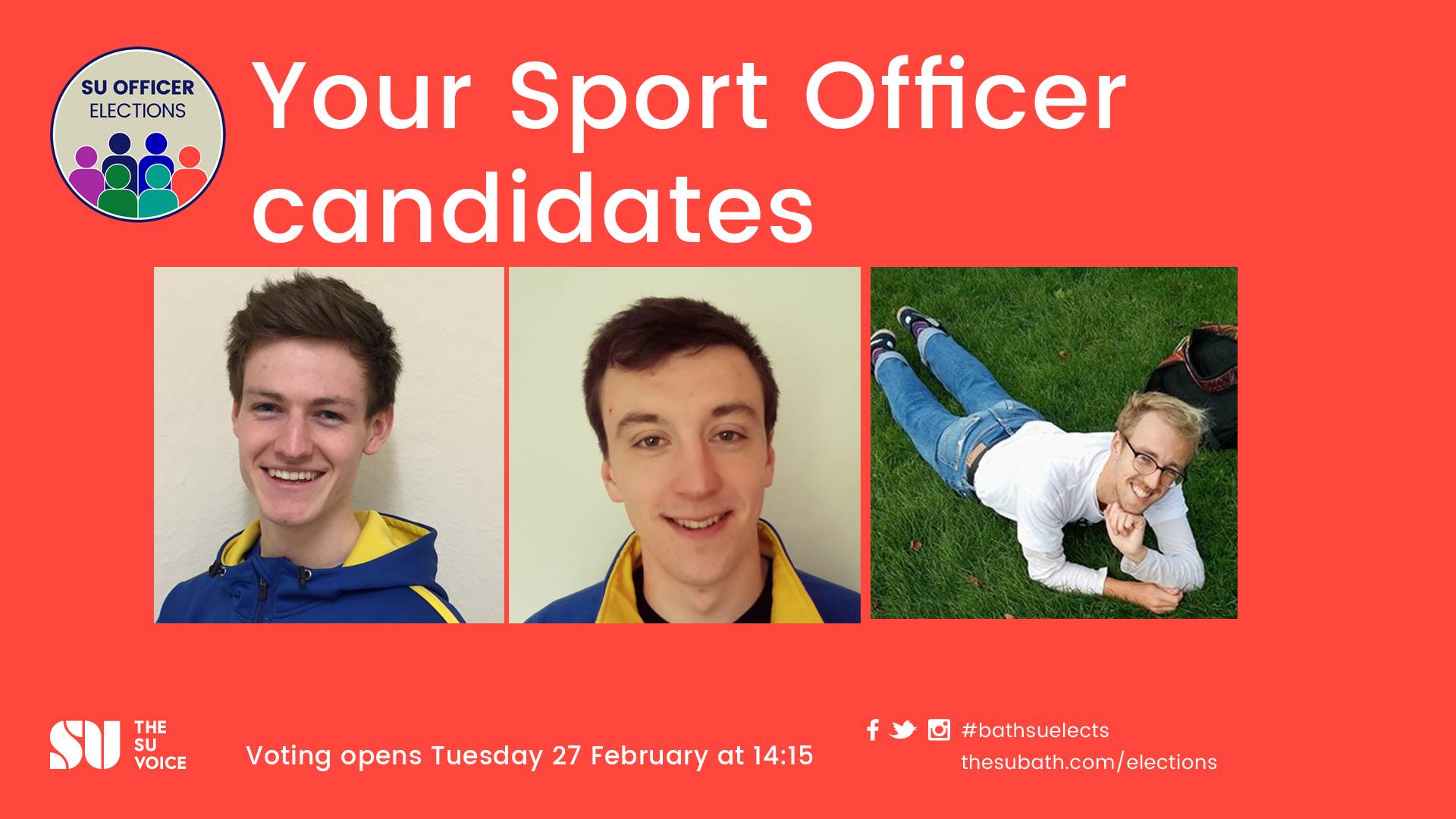 Last but not least, Andy Galloway, Jake Pitchers and Ed Dunkley took to the stage for a joyfully energetic debate on sport. The tone was undoubtedly set when, in opening statements, Ed hurriedly ate a biscuit and Jake compared himself to a coconut (tough and hairy on the outside, sweet on the inside).

The questions opened with issues surrounding the 3G pitch. Ed advocated for a student led campaign that would work to reinforce interest within students and the university alike. Andy responded to this point by arguing that the student campaign hadn’t fully worked in the past, and that further work would depend on the new VC. Jake suggested that both of these comments were not ambitious enough: ten, maybe twenty 3G pitches could be on the cards.

When the candidates were asked what they would prioritise, Jake gave the audience a tantalising cliff hanger answer with regards to his plans to replace Score. Ed’s big goal was to begin monthly gym memberships, which was hotly debated between the candidates; the Ed stressing a perceived benefit to students, Andy arguing a detrimental monetary effect on the sports facilities, Jake arguing that gyms are no fun. Andy’s answer to the question was more geared around prioritising welfare, with the creation of wellbeing and inclusivity reps on teams and exec.

When it came to the individual questions, Ed was questioned about the feasibility of his proposition for free training time off campus. He promptly responded with examples from Hayesfield School and the leisure centre. Andy was asked whether or not his alumni events would actually benefit existing students, which he responded to by describing a detrimental disconnect between current and former students. Jake was asked whether or not he would actually do the job, which of course he said yes to.

Questions to candidates finished with Jake inviting everyone to his house to play a thousand piece “dogs at work” puzzle piece instead of Score tomorrow night. Say what you want about elections, but they’ve certainly not been boring.

“Strike On! Teach Out!” Strike Action at The Bell Inn