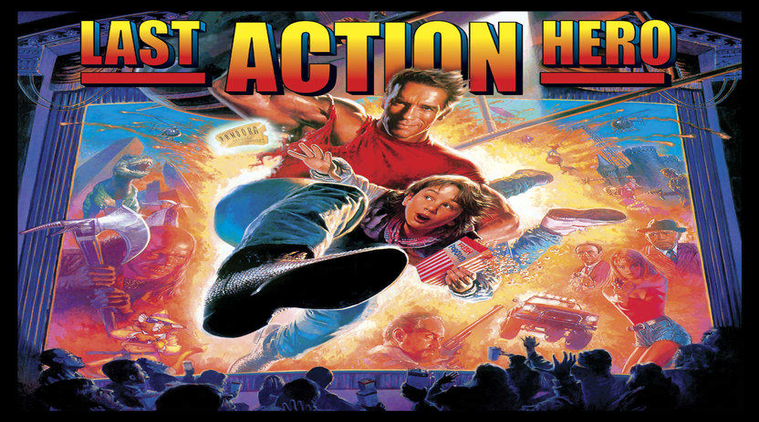 In a recent interview, Last Action Hero’s director, John McTiernan (who shot the movie ‘Predator’ in a tropical jungle and was sacked of his Rollerball, then recently just completed a year in prison because he had spied on his producers during the making of this exact movie) declared that shooting the movie was the worst experience in his directing career, because the story of its production is a chaos with a better scenario than the actual movie itself.

The movie takes place in the 90s, with Schwarzenegger acting as himself. He simultaneously portrays the character Jack Slater, who is the star of the Jack Slater franchise (a movie franchise in the same spirit as Lethal Weapon) of which Danny, a fourteen year old, is a fan. Using a magical cinema ticket, he is transported into Jack Slater’s world, while the movie’s antagonist is moved into the ‘real’ world. Here, Jack Slater and Danny will have to stop him. Schwarzenegger mocks the action movie genre by playing two different roles (himself and Jack Slater).

Schwarzenegger is immediately on board with the concept, but hates the script, and Columbia (who bought the script for 350,000 dollar) hired Shane Black to re-write the script for one million dollars. John McTiernan (Predator, Die Hard) joined the project with Black, but him and Schwarzenegger did not like the end, causing Columbia to hire William Goldman (Marathon Man) and Carrie Fisher for another million to write the female characters.

While the budget allocated to the writing process was generous, Marc Canton replaced the initial producer, Steve Roth, after he was suspected of using the money to hire prostitutes. Marc Canton had a great vision for the movie, which he hoped was the beginning of a new franchise. Deals with Burger King and Mattel were made to advertise the movie and to create toys, and a deal with Sony was made to produce a music album and a video game. This same Marc Canton, without consulting anyone, declared that the movie would be released on the 18th of June 1993, giving only 10 months to McTiernan to finish the movie, although the script was not fully written!

The budget started exploding: from the initially planned 90 million dollars (15 dedicated to Schwarzenegger’s salary), the marketing team spent an additional 27 million; the trailer alone is rumored to have cost about 700.000 dollars! They also installed a gigantic inflatable Schwarzenegger balloon at Times Square, only three days after the 1993 terrorist attack of the World Trade Center. Unhappy with his hair and the dynamite sticks on the movie posters, the actor made them re-print thousands of them. Marc Canton also claimed that Last Action Hero would be the first movie to be advertised in space, thanks to a poster on the Columbia shuttle (billed half a million dollars) which would leave Earth a month after the movie’s release, due to some technical issues.

Finally, on the 11th of June, despite some scenes being re-shot only 3 weeks before and included into the movie without any editing due to the lack of time, the premiere screening started in Los Angeles-A few hours after Jurassic Park’s.  After the premiere, the audience was baffled. No one knew exactly how to react to the movie and Jurassic Park was on everyone’s mind. It revolutionized the way movies have been made for years to come: Last Action Heroes was not even released yet, but already belonged to the past.

At that point, the dinosaurs were to become the biggest success in cinema history, crushing every competitor, and a week later, Sleepless in Seattle was going to ruin any hope of a late success for Last Action Hero.

This movie is still worth watching. Schwarznegger mocks himself, the action is well shot, the bad guy could be from the best Die Hard, and it is a great parody of the Action movies of the 1980’s/90’s. Last Action Hero is a must see to understand the code of an entire genre which defined an era in Hollywood’s history.

In The Heights by BUSMS Review