Jamie and I were invited to review Tapas Revolution, a new Spanish tapas restaurant located in Southgate and guys, it was INCREDIBLE.

Being half Argentinian and having spent 3 months working in Madrid, I had very high expectations of the food. So many restaurants try to recreate the flavours of authentic tapas and many times, don’t get it right. Tapas Revolution, on the other hand, hit the nail on the head. From the moment we walked through the door, the service was impeccable, with the host and waiters being so helpful and friendly.  But, let’s get straight down to the food: first off, I want to say that I was pleased to see the variety of vegan and vegetarian dishes available, and that these were so delicious.

We ordered the following dishes:

As for drinks, we got a jug of white wine sangria that was the most delicious sangria I’ve ever tasted. I loved the twist on traditional sangria and as a lover of sweet alcohol I was over the moon. 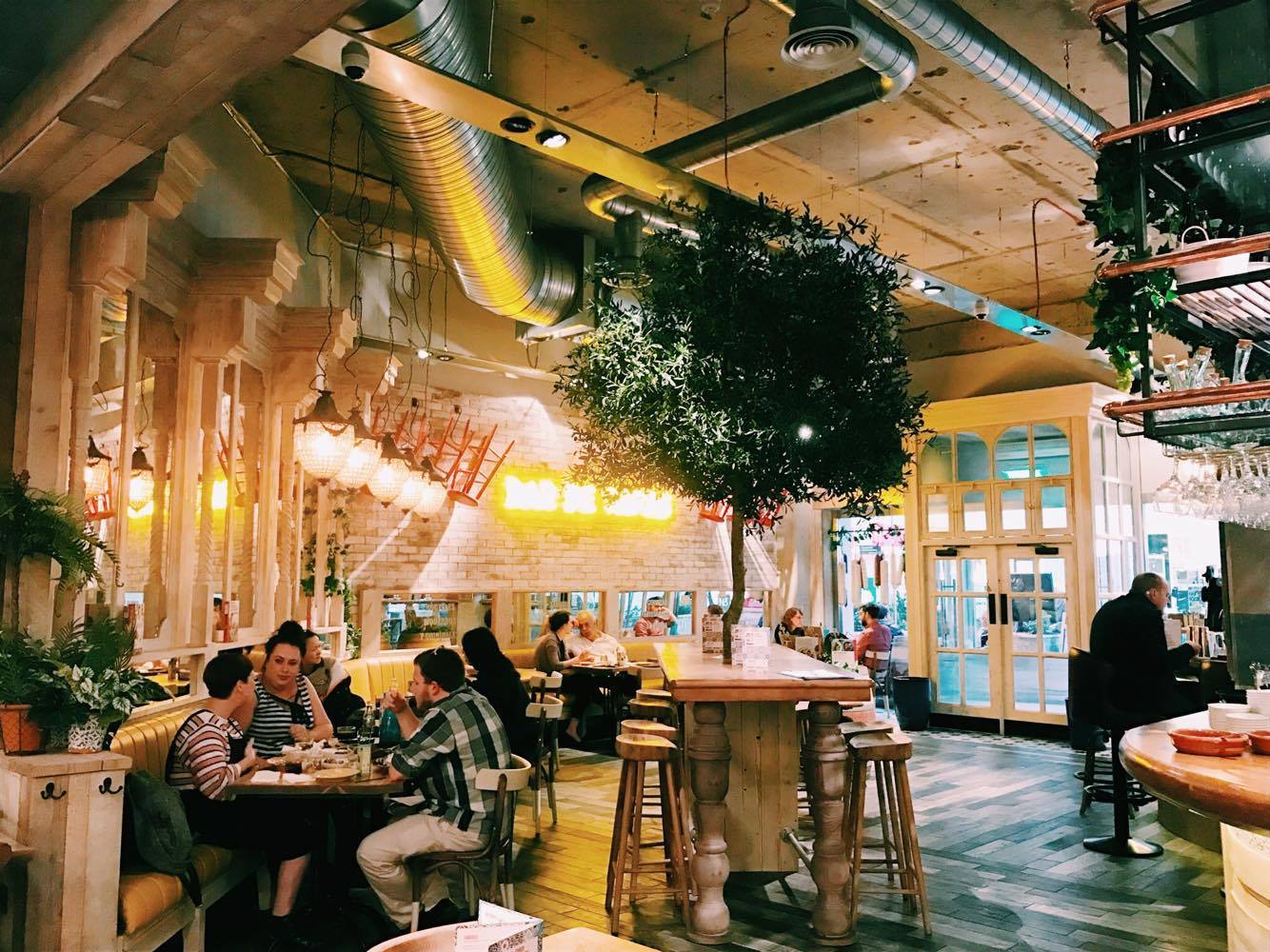 I will review the non meat items because I basically demolished them, which I think, shows how good they were. I was impressed with how the chefs managed to perfectly balance the saltiness of the aubergine and the sweetness of the honey so that it was never too sweet and sickly. They were beautifully fried and crispy and it was like heaven in a bite. (I was a big fan, in case that isn’t obvious!) I was particularly excited about the Patatas bravas because they are so traditional and so great in Spain and I was not disappointed. The spicy tomato sauce gave off great heat without being too spicy or overpowering the potatoes. The potatoes themselves were crisp and despite the sauce did not go soft. Now I love, and I mean loooooove Pimientos de Padrón; I ate way too many of them in Spain and had very high expectations and I can say, hand on heart, they were exactly like I had previously tasted and envisioned. 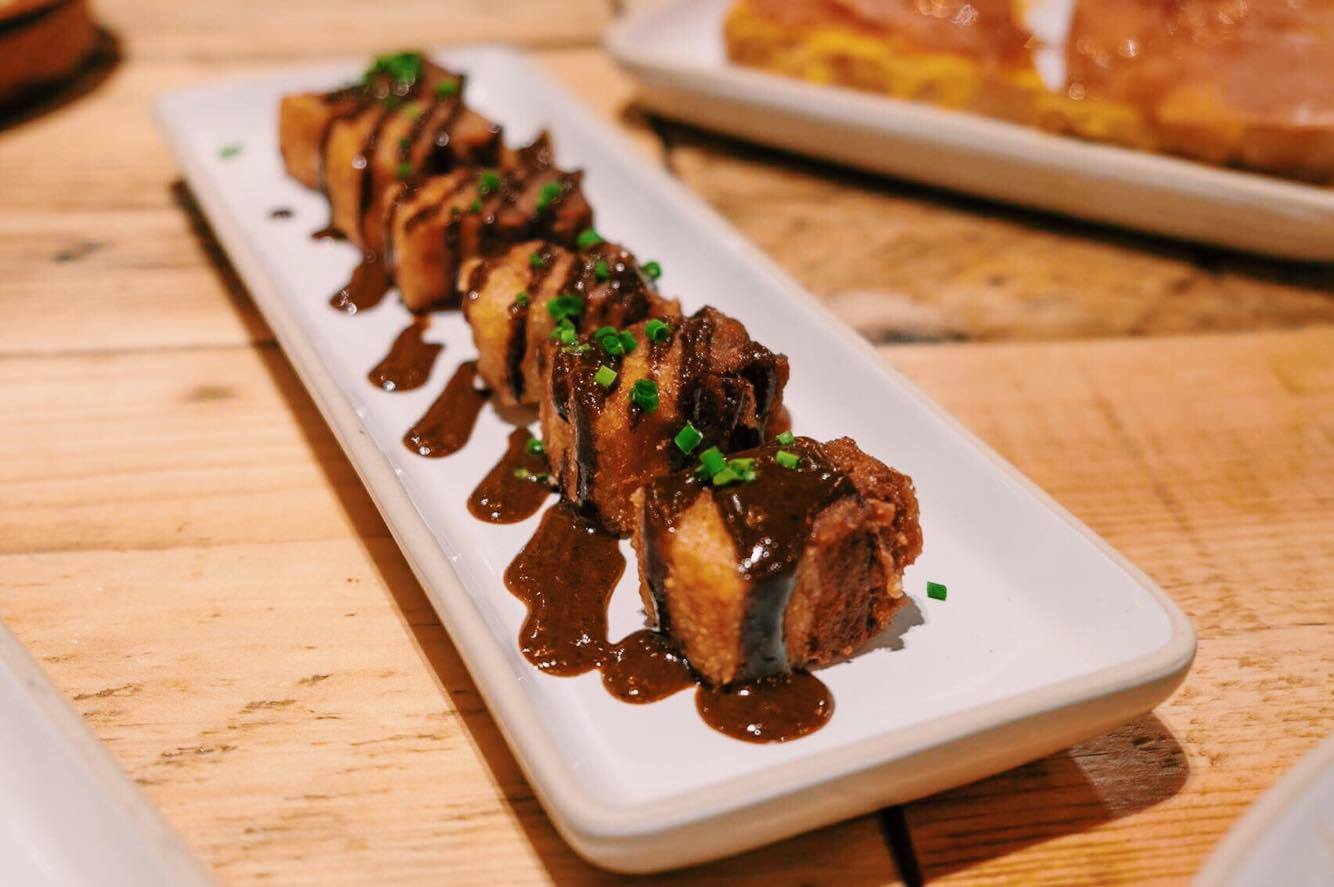 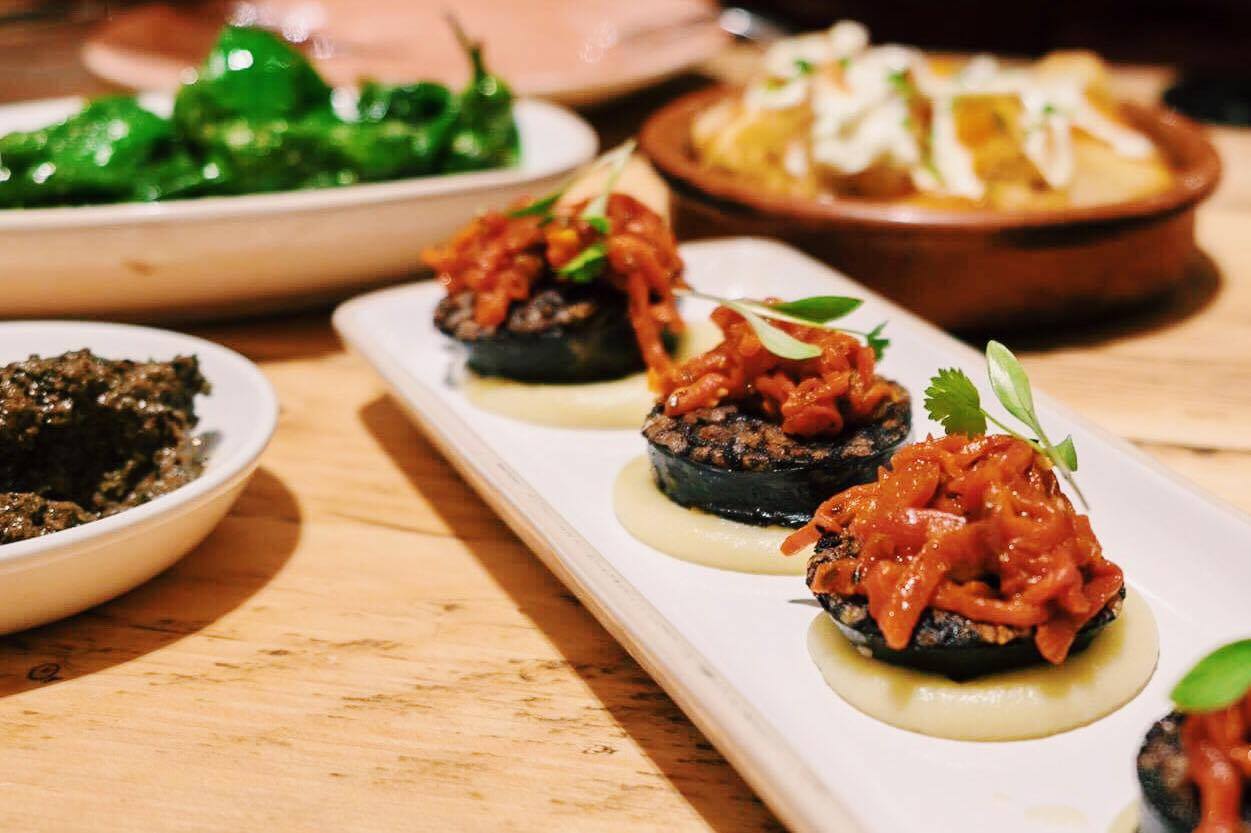 Jamie isa man of very few words and yet, walking home after the meal, he did not stop talking about the food. He felt that the morcilla was the most delicious thing he had ever eaten. They were succulent and flavourful and the apple puree in which they sat gave a wonderful sweetness to the saltiness of the morcilla. The pork belly, in his words, was ‘heavenly’ and ‘melt in the mouth amazing’, perfectly balancing the sweet and spicy flavours. Their portion sizes were also great, enough if you wanted to share, but not too much if you want to eat it all. The pan de la casa, was a great, simple starter that hit the mark on flavours; the tomato garlic sauce was creamy and the Serrano ham was perfectly cured. 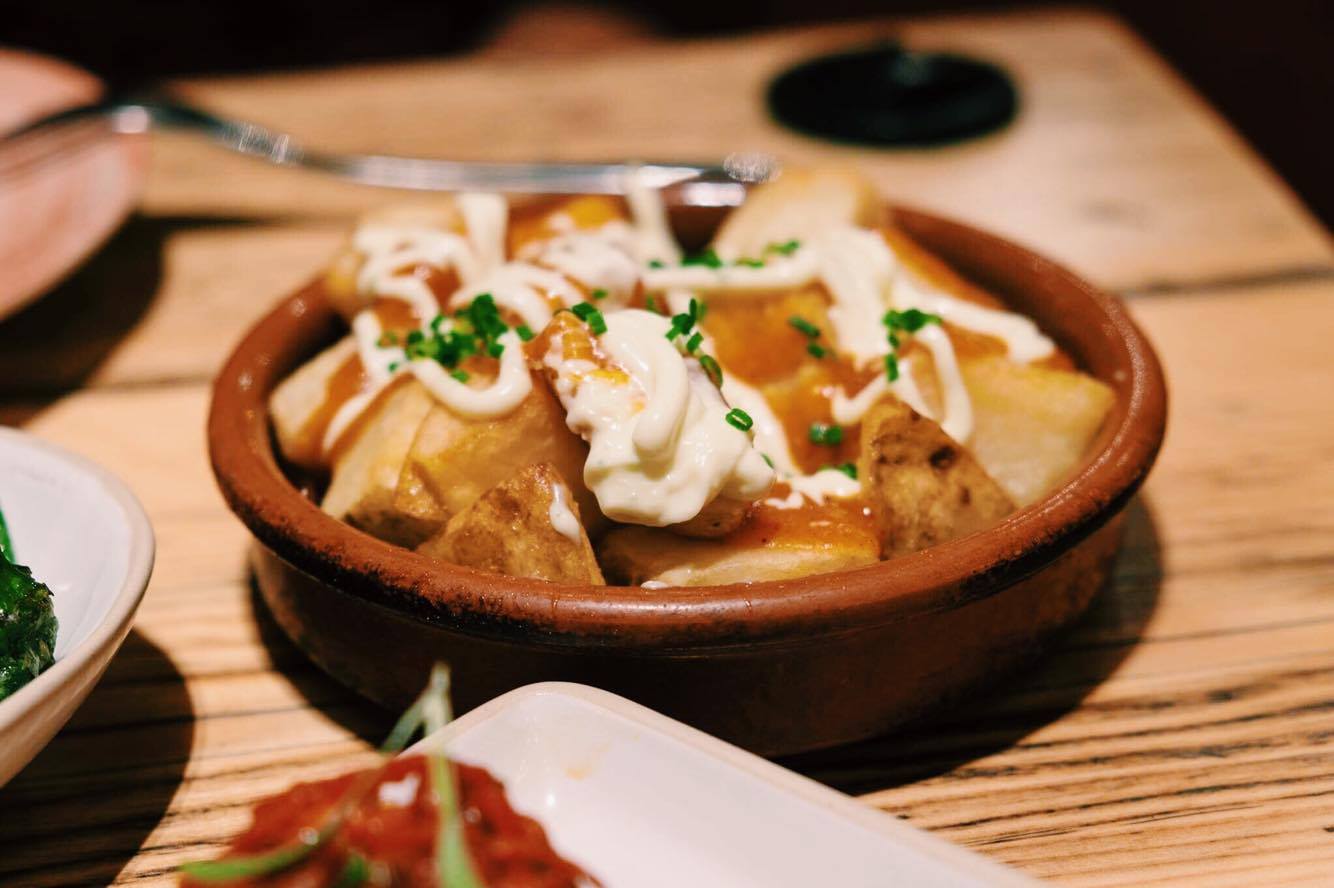 Finally, the Churros were crisp on the outside and soft on the inside, exactly how they should be. Once again, truly authentic to Spain and Argentina, with the right amount of sugared cinnamon on top. 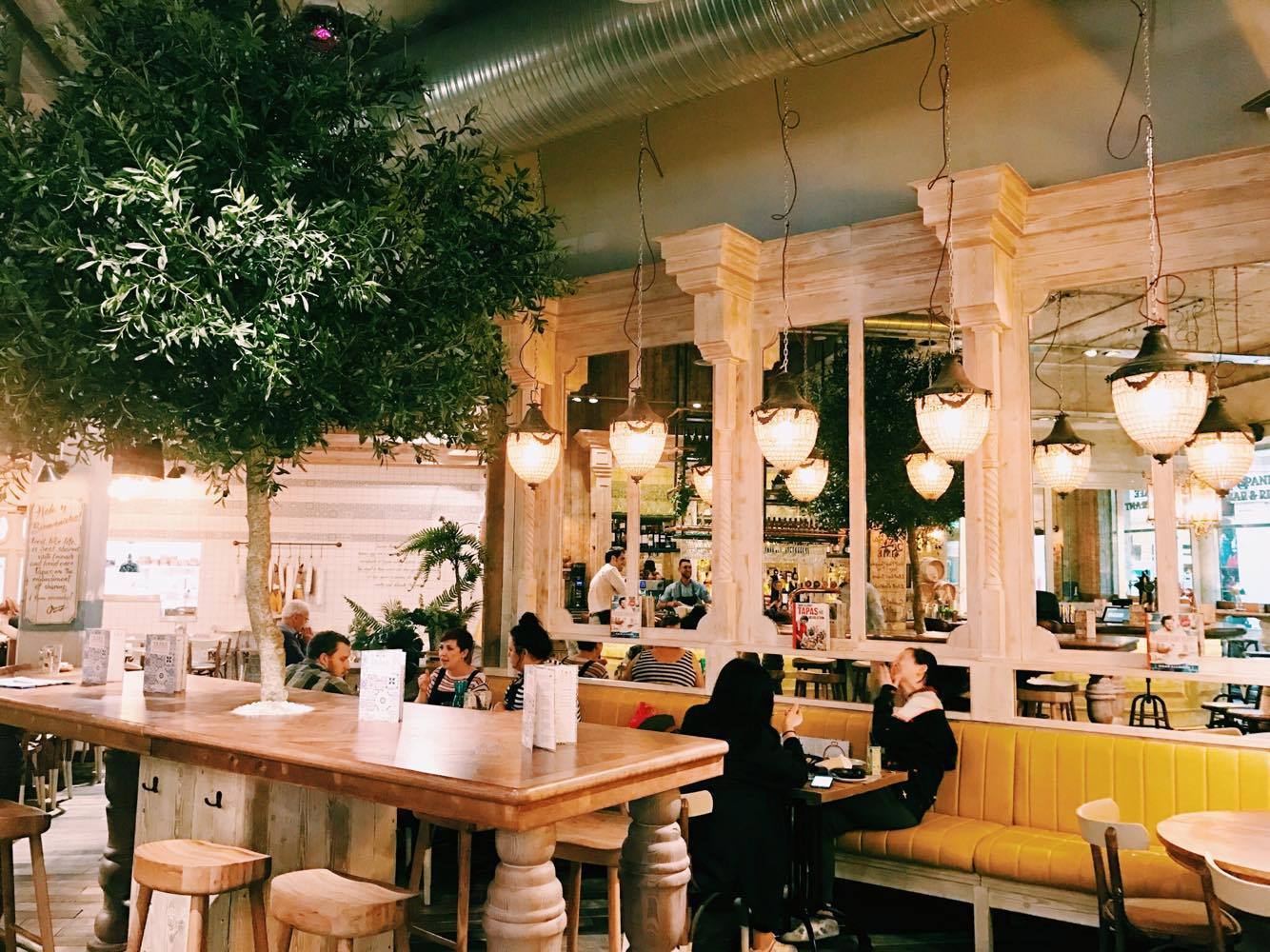 All in all, I don’t know if you can tell but we were big big big fans of the food at Tapas Revolution – the food was amazing, the service was great and the setting was beautiful. Their prices are reasonable and they do a great lunch menu where you can get big portions (like their chorizo bun or a large salad) for only £7.50. And they do half price Sangria jugs and 2 for 1 cocktails from 4-7pm! Definitely worth giving a try and you will not be disappointed! 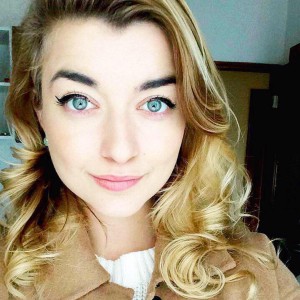 A Vegetarian’s Guide To Puglia