Benjamin Francis Leftwich is getting ready for what has probably inaccurately been referred to as his comeback tour. After a few years off the radar, he is spending most of his time playing through new songs in his room, working on different set-lists and just generally trying to get himself ready.

The tour won’t reach the West Country till May and the release date for his next album is the 19th August, but in the meantime you can listen to ‘Tilikum’, the first single off ‘After the Rain’. If you Google search “Tilikum” like I did, the majority of images that come up are of a famous Orca from the film, “Black Fish”. Alas, Letfwich did not pen this record about a Floridian Killer Whale (don’t be fooled by the cover art), but instead states that the name represents something much more sentimental to him.

“I was planning on having a baby and calling it Tilikum because I love that name and the connotations in Native American folklore – and it’s a beautiful word.”

Full disclosure here – when listening to the single, I unexpectedly found myself tearing up. I don’t know whether that was something to do with the song’s sentimental tone and careful harmonies, or the fact that I was listening to it during an especially stressful time (dissertations, presentations, sleep deficiency), but whatever the reason the single stuck with me and has earned it’s place on every chillaxing playlist I’ll ever make.

The song starts off sounding like most acoustic love songs, with gentle vocals and delicate strums; then you begin to notice that there is a sadness to it hidden in the lyrics (take “Be my rose, growing in the cold”) and it catches you off -guard. If you are at all feeling vulnerable, it may make you reflect a little too hard.

When I asked him if he wrote the song with anyone in mind, his response was relatively reserved. “I see the song as almost a look into the future. I am definitely thinking about the future when I’m singing it. I’m not sure if that makes sense but that’s the best way I can describe it. It’s all influenced by stuff that’s happened to me, not just one specific situation, but it’s kind of hard… The chorus is full of love. It’s beautiful, but I feel a coldness sometimes when I’m singing that message.”

Previously, Leftwich has stated that the songs on the upcoming album [After the Rain] are some of the most personal he’s ever written. Understandably, he admits to finding it difficult to write such intimate content, exposing himself in an unavoidably obvious way.

“It takes time, it’s not an easy thing to do. And also it’s about the music as well; it’s about me and how I’m feeling and getting that down on paper. So all of those things coming together takes time. It’s kind of the deal you make with yourself as a song-writer, if you decide you want to make that kind of music and be honest. And I don’t mean just an acoustic singersongwriter – in a metal band or a jazz musician, or a classical composer or a rapper even, just being honest and putting yourself out there. To me all the music I love – that’s the stuff those musicians are trying to do. It’s important for my own personal well-being as well as musical well-being, if that makes sense.”

It does make sense, Leftwich writes his music like someone who has accepted that writing about your own experiences in an attempt to connect with other people means signing up for a lack of emotional privacy.

The upcoming record is set to be a thematic upgrade on Leftwich’s début album. He feels “it’s a lot more 3D in its sound than Last Snow [Before the Snowstorm] was. I’m really proud of Last Snow, but like anyone, things around me have changed.” The change he refers to has been critical; after the success of his début album, Leftwich suffered the death of his father. It was a loss that hit him hard and was largely the reason for his 4 year hiatus.

When I asked if he has since found song-writing helpful in the coping process and generally a good healing method, he replied with a surprisingly balanced view.

“It’s been therapeutic in some senses. You know, when it goes well in the studio and with the writing process, then it’s amazing achieving those things; but then of course it can also be emotionally destructive as well.”

Many musicians regard song-writing as an introspective way to address and understand whatever important issues they may have; it can be a reflective process that helps them deal with problems in a structured and considered way. The flip-side to digging deep emotionally for the sake of a song, Leftwich recognises, is the risk that you may “push yourself too hard and get locked in your own mind, or think you need to kind of damage yourself to get better songs”.

“It’s been therapeutic in a sense that it’s helped me to get to releasing a new album and do what I care about; music and song writing is what I care about most in the world, other than my family, obviously. So I mean it’s hard to say it’s been directly therapeutic because it’s all I do; if I’m listening to music or I’m writing, or I’m on tour, it’s all part of life – and life is therapeutic in itself.”

Leftwich has addressed the reasons for his absence in a public note he posted to Facebook. One particular statement, “everyone deals with loss in their own way and each way is valid and beautiful” especially stuck out to me, so I asked him what he meant by “beautiful”.

He hopes this is something that will resonate with his listeners and maintains that writing the open letter was something he had to do before embarking on the next stage of his career. Currently promoting a tour and generating excitement for his next album, Leftwich is happy to be busy again. With the tour comes a selection of new artists that the singer has hand-picked himself – a clever way to organise seeing those he admired perform live.

He will be playing at the Louisiana in Bristol in May, joined by student musician, IsaacO. “He’s amazing, I haven’t actually announced it yet so there you go that’s an exclusive. He’s at Bristol studying medicine and he just writes really beautiful songs and has a really beautiful voice. I really love his music, so selfishly it’s going to be great to see him play.” 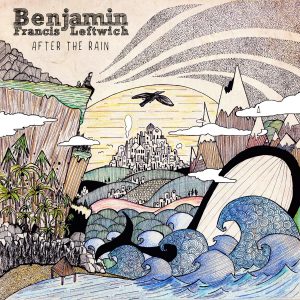