The review is based on the first half of the fourth season and while I have tried to avoid any type of spoiler, it is difficult to analyse a show without mentioning anything that happens – so be warned if you haven’t finished season three yet! 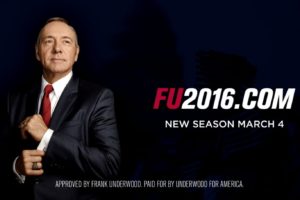 Whereas the situational setting of the fourth season of House of Cards seems to have adapted to the current events of the real-world, the characters’ situations seem to pick up exactly where they left off. The producers and writers had evidently planned the release of this latest season to perfection, with the party primaries occurring in the show just as Super Tuesday closed in the real world. Unfortunately, it seems the primaries, just like most of the political developments throughout the fourth season, take a secondary role. In fact, way back from the first season until now, the larger political story has slowly become more and more a background noise. The fourth season confirms this trend, with the primaries and the international dealings of the president being used simply as props for the real focus of the show; Frank and Claire’s conquering of the world.

If you have watched the first few episodes you may be slightly confused. As the third season concluded with Claire basically walking out on Frank and their ‘empire’, the first episodes of the new season follow suit. However, just when everything seems lost for our favourite/most hated power couple, they stick together for what they do best; feeding off each other to become ever-more powerful and in control. In a way, the fourth season is what all the previous seasons had made us dread: a show about the Underwood marriage. If you power through the first episodes and stick to it, the focus on the couple takes a much larger, political scope and you will be glad you stayed tuned in.

There are, however, some sad sights in this new season. The trademark breaking of the fourth wall seems to have been somewhat forgotten, with Frank addressing the audience with such scarcity compared to previous seasons. It is exactly this breaking-away from the originality of the show that worries many viewers. The fourth season plays a lot with Frank’s unconscious and many previous characters are called in as he struggles with his conscience. While it is somewhat effective to leave the audience guessing between what is real and what is his dream, more often than not it is clearly his imagination and we are dragged through some weird imagery that is never referred to again. 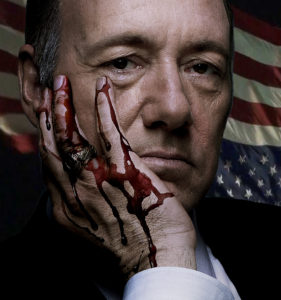 Another issue with focusing on Claire and Frank is that other characters do not get their rightful dues, it seems. Whether it is some old characters, such as Seth Grayson – the White House Director of Communications – or new characters, such as Will Conway – Frank’s new political adversary in the election – no one really has their story develop as far as they deserve. The result is an intensifying of both Underwoods’ characters, which can be a good thing as they are by far the most interesting in the whole show, however it does make for rather monotonous viewing at times. For the most part, it seems the power-couple are ready to stop at nothing and mow down anything in their way to success. Most die-hard fans will undoubtedly hope for the complications facing our antiheroes to get bigger and better, underlining the cunning and brutality of the Underwoods yet again.

All in all, this may not be the show’s best season, but thanks to two formidable main characters it remains the wonderful political drama we have been enthralled by throughout the past three years. One can only hope it picks up its original trademark’s once again.

Tommi Mazzanti is Online Editor at bathimpact (2015/16). He writes about both national and international politics.

From the perspective of a sex worker