Survey Into Racism at University

Following a racist incident at Warwick University, The University of Bath along with other notable student newspapers around the UK have decided to conduct a university wide survey into racism throughout higher education.

Farmade Ifaturoti, a student of Warwick University, posted the now viral tweet after returning home to her accommodation to see a bunch of bananas covered in racial slurs.

“Just entered the kitchen and look at what one of my flatmates has done. I am extremely disgusted.” 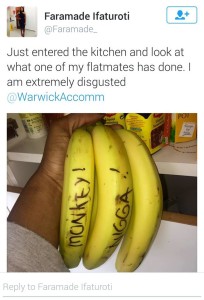 The University in question is now responding to the incident, however, in a story by The Boar, Warwick University’s student newspaper, “The student responded with her disappointment that “it took a Twitter escalation” for the University to respond.”

The incident at Warwick University begs the question, despite positive rhetoric; do Universities and Student unions around the UK proactively combat racism or merely react to it? We hope to find out.

More information can be found at The Boar.

Bath SU to support IN campaign