Electro-rock band, Editors are no strangers to the touring circuit. Formed in 2002, the five-piece’s backlog includes a number of chart successes and high profiles festival slots. Tonight, the band took to Bristol’s Colston Hall as part of their most recent In Dream tour.

Beginning with the dark, synth-heavy album opener, ‘No Harm’, the band took to the stage with a vibe that marks a definite shift from the group’s rock origins. The sheer quantity of synthesisers often left some of the band members with awkwardly little to do, with part of the band’s wonderful multi-layer sound being lost in new and old tracks alike. Tom Smith’s frantic energy as front man sustained the spirit of the gig, with moves that weren’t entirely unlike a cat crossed with an Elvis impersonator. Although the crowd were more than ready to dance with him when the songs allowed, ‘In Dream’ was only released ten days before the Bristol slot, making full audience enthusiasm near impossible when around a third of the songs played were new to them. 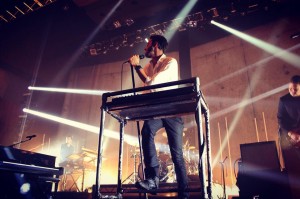 Near the end of the set, Smith was left alone on stage with an acoustic guitar and set to play an acoustic rendition of the hit ‘Smokers Outside the Hospital Doors’. In an unexpected move, he told the audience that his dad had asked him to play ‘Sparks’ earlier that day and asked which the audience would like to hear. Naturally, the crowd wanted both, and it was granted. The acoustic rendition showed Smith’s surprisingly impressive vocals and was a welcome break from a set that often amplified the bass-drum to the point of overkill.

The band finished off the set with first album hit ‘Munich’ – a fun, fast tune that had the audience singing along, even when Smith apparently forgot the words to the second verse. Coming back to a crowd eager for more, the encore featured chart-topping ‘Papillon’. This was undoubtedly an audience favourite, with old and new Editors fans dancing all throughout the stalls. Had the gig ended here, it would have been an impressive finale; showcasing how a band as talented, experienced and synchronised, as Editors still know how to get an audience jumping. However, the encore actually finished with the final song from ‘In Dream’. The slow, stripped back ‘Marching Orders’ may have brought the band back full circle to the gig’s openings, but after ‘Papillon’ it felt somewhat anti-climactic.