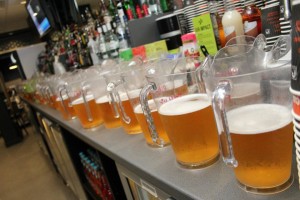 The Students’ Union has announced that they will be increasing prices at The Plug & The Tub bar for the new academic year, following the introduction of the living wage for all casual staff at the University.

On the SU website, the Students’ Union released a news statement with the plan to increase bar prices ranging from “5p to 20p dependent on the type of drink”.

The SU will also increase the cost of Score ticket prices to £5, increasing the amount brought into the SU by up to £1200 every Wednesday before VAT and depending on capacity.

During the last Academic year, the SU secured the living wage for all casual members of staff within the University, resulting in a pay increase of all casual bar staff members from £6.50 to £7.85 before holiday pay, as well as eradicating card charges more recently.

The SU has stated that, “[The increase] has been put in place to ensure that the bar can continue to meet its annual budget figure and to protect the services provided to the student body”.

“Although prices have marginally increased, the Living Wage win means that student staff are paid no less than £7.85 per hour, which is a really positive step forward”.

Jordan Kenny, Bath SU President, has said that, “The living wage was a big win for the SU, ensuring that all student staff members within the University are paid fairly”.

“The increase in prices is to cover the new wage, and will enable the SU to continue providing financial support to all the areas of the SU, including student groups, allowing them to run as effectively as they have done in the past”.

Tommy Parker is Editor-in-Chief (2016/17) and former Students' Union Community Officer (2014/15). He writes about gaming, equality issues and the University of Bath.

Freshers’ Week – it’s okay not to love it